Skip to content
2 Comments on Locating Your Role in the Story of Our Collective Liberation—Alicia CrosbyPosted in She Lives! By jannaPosted on August 7, 2018August 9, 2018

At the Christian Feminism Today Gathering Alicia Crosby gave a thought-provoking, inspiring keynote presentation titled “Locating Your Role in the Story of Our Collection Liberation.”

At two events several years ago, I had the joy of connecting with Alicia and participating in her workshops on creating communities where all are welcome. On this blog I have written about my experiences in these workshops. In conversations with Alicia I have also learned about her passion for following her call, which led her to co-found and lead the Center for Inclusivity (CFI).

Alicia began her plenary presentation at this summer’s Gathering with guidelines on “Setting Up Our Space”:

Then Alicia illuminated the biblical story of Esther, from which the Gathering theme “Standing Up, Speaking Up in Such a Time as This,” was drawn. When I was growing up in Sunday school and Girls’ Auxiliary in my Baptist church, I loved the story of Esther. But I never heard that Esther was a concubine before she became queen, that she was one of many young women forced into the king’s harem, and that she and the other women had to go through a year of “beauty treatments” to please him.

Alicia continued to shed light on this story through the perspectives of the marginalized. While the king was throwing a long, lavish party for all the noblemen and military officers, we never hear about all the common people and we don’t see the refugees from the wars won to build his large empire.

After King Xerxes banished Queen Vashti for refusing to parade in front of him and the other drunken men at his party, he had young women brought into his harem to take turns to see which one pleased him most. But we don’t hear about the young women when they were forced to come to try out to be queen, Alicia said. “They were taken against their will. Violated. They were held captive at least a year. What happens to the human spirit when you know you’re held against your will for a whole year? And when you leave, your body has been used? What happens then?” There’s so much in the Esther story that I never heard or thought about, like trafficking and violence against women.

Mordecai was also marginalized in this story, Alicia pointed out. He was a Jew in Persian culture. He refused to bow down to Haman, the king’s top official, as the king had commanded. Alicia compares Mordecai to young black people who’ve been oppressed by police officers and don’t feel they need to show them respect.

When King Xerxes went along with Haman’s plot to destroy all the Jews, Mordecai publicly lamented. But he pushed Esther to act, instead of acting himself, Alicia said, “like black women asked to save people, to speak out. Mordecai threatened to out Esther as a Jew if she didn’t speak up to the king, like people outing others for their own benefit” (Esther 4:13-14).

“What can we take away from the story of Esther?” Alicia asked. Here are some things Alicia mentioned that she saw: “Like Mordecai, we can be marginalized and still contribute to the marginalization of others. We also see this in the eunuchs in charge of the king’s harem. Agency was taken away from Esther and the other women, but Esther still stood up and spoke up. Vashti was also a heroine in the story; she said ‘Time’s Up. No more.’” 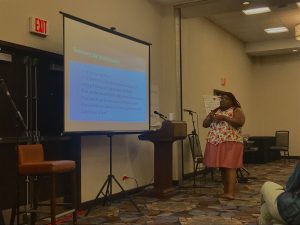 Alicia continued her presentation by asking us to form small groups to examine our own social locations, using these questions: 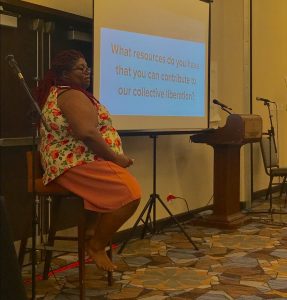 Alicia concluded her plenary talk by challenging us:

My thanks goes to Dr. Christy Sim for the photos from the Gathering.

Alicia Crosby is the Co-Founder and Executive Director of the Center for Inclusivity (CFI). Her passions for justice, spiritually engaged activism, and community engagement led her to pursue an M.A. in Social Justice and a Certificate in Non-Profit Management & Philanthropy at Loyola University Chicago. She also has a B.A. in Interdisciplinary Studies from Hollins University.